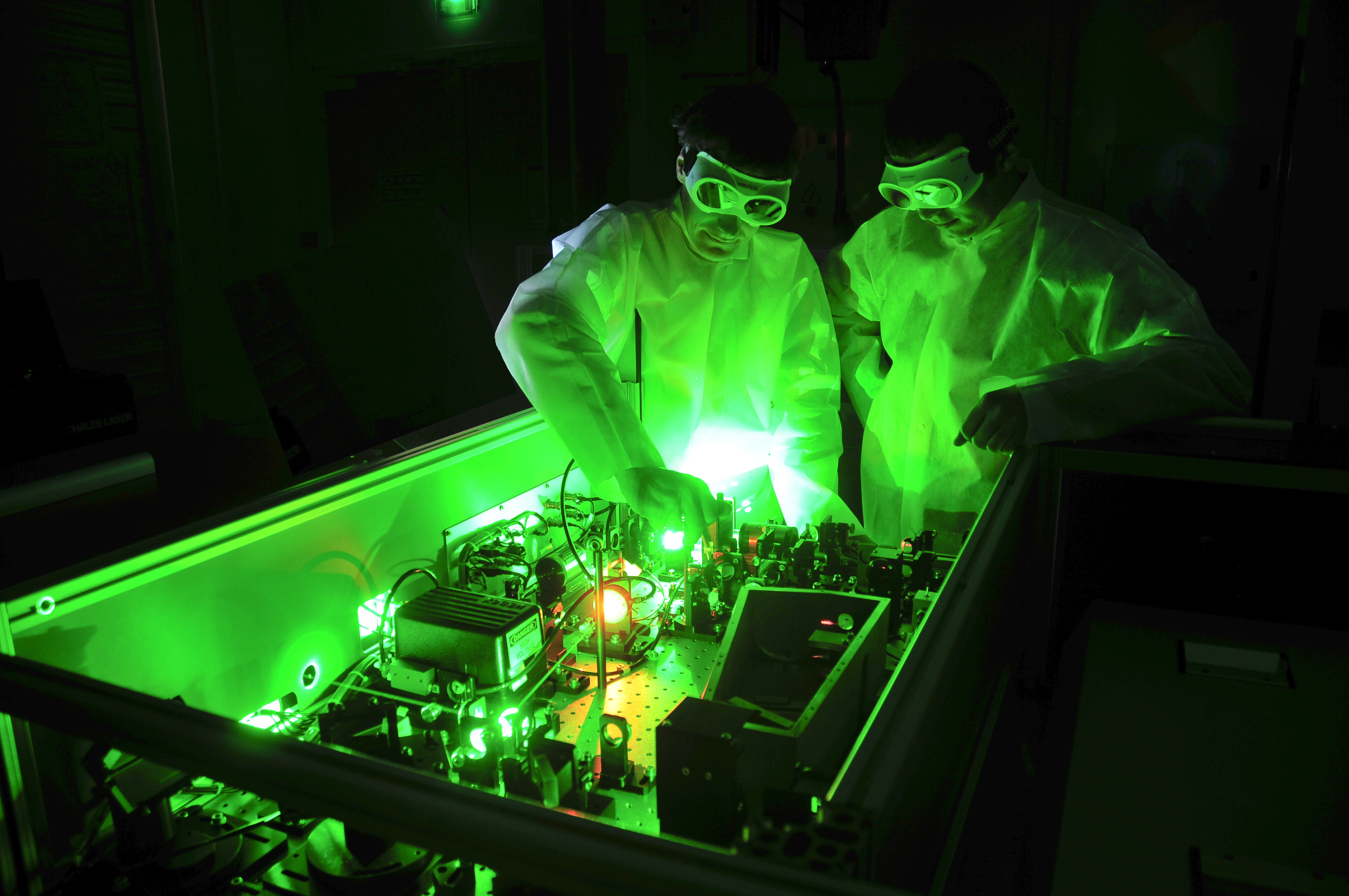 Thales and Marvel Fusion will cooperate in upgrading the laser system of the Extreme Light Infrastructure for Nuclear Physics (ELI-NP) in Măgurele, Romania. With the upgraded laser, Marvel Fusion aims to validate key aspects of its technology for fusion energy. This will make Marvel Fusion the first private company to establish a scientific collaboration with the world’s most powerful laser facility ELI-NP. For Thales, this will strengthen its leadership position in the design, development, and manufacturing of solid-state lasers for science, industry, and space.

Măgurele, Romania, December 06., 2022. Thales, global leader in advanced technologies, joins forces with the German fusion technology company Marvel Fusion and the ELI-NP in Romania to upgrade the laser system and to perform research relevant to nuclear fusion as a future new energy source.

Over the course of 2023, the three partners plan to enhance parameters of the laser system, like the temporal laser pulse contrast, enabling unique research capabilities of laser-based fusion processes. Following the successful adaptation, Marvel Fusion will be the first private company to establish a scientific collaboration with ELI-NP, due to the complementary applicability of the Romanian laser system and Marvel Fusion’s technology.

As part of an ongoing cooperation with ELI-NP, Thales will supply a new stretcher unit that is used to stretch laser pulses over time, which initially reduces their peak power. The stretched, less powerful pulses can then be amplified and thereafter compressed again. This process is part of the Chirped Pulse Amplification, for the development of which Dr. Donna Strickland and Dr. Gerard Mourou received the Nobel Prize in Physics in 2018. Mourou is part of Marvel Fusion’s Science and Technology Board.

Marvel Fusion in partnership with Thales and ELI-NP will start the experimental campaign at ELI-NP in 2023. The German company aims to validate key parameters of the laser-matter-interaction between high-intensity laser pulses with durations of tens of femtoseconds (one femtosecond is one-millionth of one-billionth of a second) and nanostructured fuel targets. In the experiments, the scientists will examine the essential physical processes of the interaction and their optimization. Subsequently, the results will be published in a peer-reviewed journal to advance the field of laser-matter interaction.

With its potential to sustainably replace fossil fuels as the world’s primary energy source, fusion energy is widely regarded as the most promising solution to climate change and the prevailing energy crisis. Building on the results at ELI-NP and the cooperation with Thales, Marvel Fusion aims to show the core building blocks of its novel technology within 3 years as a precursor to building the first commercial power plants in the 2030s. The new technologies will therefore be able to increase the European Union’s economic resilience and contribute to the decarbonization of the continent, according to the Green Deal Agenda.

“Fusion based on latest-generation short-pulse lasers can enable the EU to guarantee an advanced energy system,” says Franck Leibreich, Laser Solution Managing Director at Thales. “With the most powerful laser system ELI-NP in Romania and the leading manufacturer of industrial short-pulse lasers, Europe needs to capitalize on its outstanding knowledge and first-class infrastructure to globally lead in laser-based fusion.”

Thales joined the ELI-NP program in 2013 to develop and build the laser system. In 2019, the construction was finished by Thales and for the first time, a ten Petawatt laser pulse was shot at the facility. With two laser beams each reaching ten Petawatt of peak power, ELI-NP is the world’s most powerful short-pulsed laser system. At the facility, scientists research in fields ranging from laser-based nuclear physics over ion therapy for the treatment of cancer to astrophysical processes.

“The ten Petawatt laser system is an astonishing power level for laser systems. Experimenting at ELI-NP means that we now enter a phase in our technology validation in which we can draw direct physical conclusions about scalable designs of our target structures and the laser-target-interactions,” says Dr. Georg Korn, Chief Technology Officer of Marvel Fusion and former scientific director at ELI.

“ELI-NP with its unique capability worldwide to provide ten Petawatt laser beams is expected to bring significant advances in basic sciences and important breakthroughs in applications of major societal interests,” says Dr. Călin Alexandru Ur, Director of ELI-NP. “The mission of ELI-NP is to act as a catalyst for connecting the research community with both the academic sector and industry and to become a hotspot for science, innovation, and development. Embarking with Thales and Marvel Fusion in a high societal impact scientific collaboration dedicated to innovative technologies in laser-based nuclear fusion is an important step for ELI-NP in achieving its mission.” ELI-NP’s actions to capitalize on research potential, technology transfer and know-how are in line with the recommendations contained in the National Strategy for Research, Innovation and Intelligent Specialization 2022-2027 adopted by the Romanian Government in July 2022, which emphasizes the importance of scientific partnerships with the private sector and the development of international cooperation.

Marvel Fusion, founded in Munich in 2019, pursues a new and fast-track route to commercialize fusion energy. Its new technology concept is based on highly intense short-pulsed lasers and proprietary fuel targets. Scientists from the Ludwig-Maximilian-University (LMU) in Munich, the University of Stanford, and the Massachusetts Institute of Technology (MIT) have recently joined forces with Marvel Fusion to bring its fusion concept to fruition. In its next steps, the company will upgrade existing laser systems (2022-2025) like ELI-NP and at the Centre for Advanced Laser Applications of the LMU to validate its technology by demonstrating experimentally important physical processes, paving the path to net energy gain. Marvel Fusion is currently funded with 60 million euros in private capital and cooperates with Thales, TRUMPF, Siemens Energy, ELI-NP, and the LMU.

Thales (Euronext Paris: HO) is a global leader in advanced technologies, investing in digital and “deep tech” innovations – connectivity, big data, artificial intelligence, cybersecurity, and quantum computing – to build a confident future crucial for the development of our societies. The Group provides its customers – businesses, organizations, and governments – in the defense, aeronautics, space, transport, and digital identity and security domains with solutions, services, and products that help them fulfill their critical role, consideration for the individual being the driving force behind all decisions.

ELI-NP is a world-leading research infrastructure in the field of Nuclear Photonics implemented by National R&D Institute for Physics and Nuclear Engineering “Horia Hulubei” (IFIN-HH) on the Magurele Physics Platform, in the southern part of Bucharest. As part of the pan-European project ELI, it was included on the ESFRI Roadmap in 2006 and is listed among the ESFRI Landmark projects today. ELI-NP is nowadays the host for the most powerful lasers in the world, developed and installed by Thales. Two state-of-the-art Ti:Sa ultra-short pulsed high-power lasers of 10 PW power each, with a repetition rate of one pulse per minute are in operation at ELI-NP. These lasers will allow for the achievement of unprecedented intensities at the focus, of the order of 1023 W/cm2, opening new frontiers in the exploration of ion acceleration with solid state density, high-intensity laser-matter interaction, laser-driven nuclear physics and astrophysics, strong field non-linear quantum electrodynamics, and dark matter physics. ELI-NP is also committed to pursuing research topics related to the improvement of life quality such as medical imaging, hadron therapy, radioisotope production, and also topics related to particle accelerators, space technology, industrial imaging, and fusion energy.